Alandia.com does not support Internet Explorer, please switch to another browser.
The Joint War Committee (JWC) has amended the Listed Areas and we hereby give notice of cancellation with effect from 6th April 2022... Read more

Results for ALANDIA Group in 2019

The Group’s consolidated profit in 2019 was €3.1 (21.6) million, and the group’s total income from premiums amounted to €80.5 (69.1) million. The technical result of insurance operations, including the change in equalisation provisions for non-life insurance totalled €-9.2 (16.1) million. The effect of the equalisation provision on the technical result of insurance operations was €5.4 (21.0) million and was hence significantly lower than in the previous year. The loss-ratio for non-life insurance was 98 (83) per cent. The contributions from risk insurances in life insurances totalled €1.8 (4.6) million. The net asset value increased with €3.0 (-16.7) million and on 31st of December it totalled €152.7 (149.7) million. Considering dividends paid during the year the net asset value return totalled €3.3 (-2.9) %.

The premiums written from non-life insurance increased with 19 (29) per cent, and the premiums earned increased with 27 (34) per cent. This growth is a result of Alandia’s growth strategy. The operating expenses rose which was mainly due to an increase of €1.7 million in acquisition commissions due to the higher premium income. The claims experience was clearly worse than expected. This is mainly due to an unusually high frequency of medium-sized claims that contribute to the weak outcome.

Liv-Alandia yielded a good result as both risk insurances and interest movement contributed positively. The result yielded by changes in rates has benefited from a positive return within investments. Although continuously negative the loading profit showed an improved result in comparison to the previous year. Since the 1st of January 2019 Liv-Alandia has halted the sales of new policies, and towards the end of the year an agreement was signed with Aktia in regard to the
transfer of portfolios, which is due to take place during spring 2020. 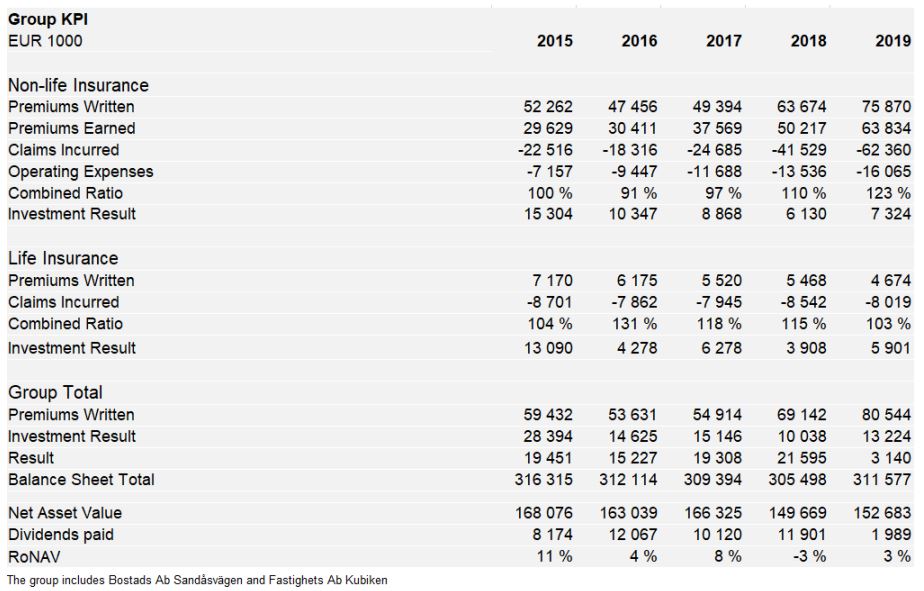