Alandia.com does not support Internet Explorer, please switch to another browser.
The Joint War Committee (JWC) has amended the Listed Areas and we hereby give notice of cancellation with effect from 6th April 2022... Read more

Alandia’s result for 2021 is strong

Alandia’s result for 2021 is strong

In 2021 the increase in premiums has been good with 10 % higher earnings compared to the previous year. Claims costs were higher than expected resulting in a negative result for the insurance operations. The result of the investment operations was very good with a result that mainly derived from investments in stocks while the return of the fixed income portfolio was slightly negative.

Alandia switched to IFRS reporting on 1 January 2021. This affects the accounting and  how the result is being presented. Net asset value is no longer used but instead change in equity can be used to track the company’s development.

On 1 December 2021, Alandia signed a letter of intent with LokalTapiola regarding the selling of its statutory accident- and patient insurance portfolio, including customer relations to LokalTapiola. The transaction does not involve any changes to the insurance coverage of the customers concerned and the customers do not need to take any measures. In order for the transaction to be completed, approval is required from FIN-FSA Financial Supervisory Advisory and both parties’ general meetings. The transaction is intended to take place on 1 July 2022.

Premium income amounted to EUR 93 million (85). A large part of the increase of 10 % in premium income came from Hull & Machinery, P&I and Cargo insurance.

Operating expenses amounted to EUR 19.4 million (16.5) and the expense ratio was 24.3 percent (22.7). The increase was mainly from increased broker commissions due to a larger part of the premiums underwritten through brokers.

The combined ratio for insurance operations for the year was 104.6 percent (95.3).

The return-on-investment portfolios was 9.3 percent (5.4). The return was relatively evenly spread across the year. All asset classes apart from fixed income contributed to the positive result.

The solvency ratio is very good and amounts to 247 percent (273 percent) at the end of the year. 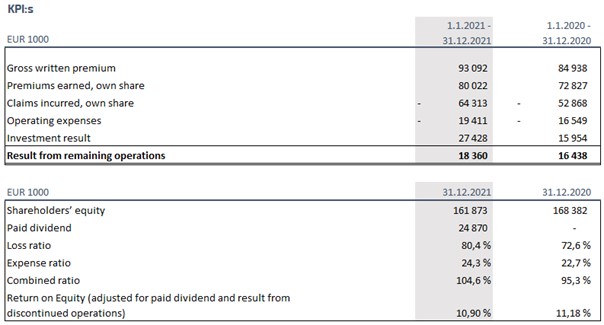 Alandias A- rating at Standard & Poor’s was confirmed on 15 November 2021 and remains on Negative Outlook.

Premium income in 2022 is expected to end at the same level or slightly above the 2021 outcome.

The Board of Directors