Alandia has chosen not to renew any major insurance contracts during the beginning of the year due to their high claims costs, which has led to a noticeably lower gross written premium during the period. The divestment of the statutory accident and patient insurance business as well as some delay in final documentation from our brokers are factors further contributing to the lower gross written premium. For the full year, this is expected to even out so that the full year gross written premium will still be in line with the previous full year. Despite this, premiums earned for the period showed a slight increase which is expected to continue for the rest of the year.

The claims frequency continued to decline, and the total claims cost on own share decreased to a sustainable level. This resulted in a much-improved loss ratio of 67 per cent at the beginning of this year compared to last year (81%).

Operating expenses decreased slightly, which also led to an improvement in the expense ratio compared to the same period last year. The expense ratio is expected to decline slightly in the second half of the year.

Uncertainty in the financial markets has been significant during the period due to Russia’s invasion of Ukraine and rising global inflation. This has been reflected in rising interest rates and falling share prices. As a result, the result of the investment activities for the period was significantly lower compared to the previous year, EUR -3.3 million compared to EUR +17.2 million. Given the difficult market conditions, the return of around -1 per cent was still satisfactory relative to various market indices.

The result of the insurance business improved by EUR 5.6 million from EUR -2.6 million to EUR 3.0 million in the first half of 2022.

The loss ratio for non-life insurance was 66.9 per cent (81.3%). Including the now discontinued statutory accident and patient insurance business, the loss ratio is 57.5 per cent.

The solvency position remains very strong with a solvency ratio of 275 per cent (253%). For further information, please refer to the following tables of key figures and the attached profit and loss and balance sheets. 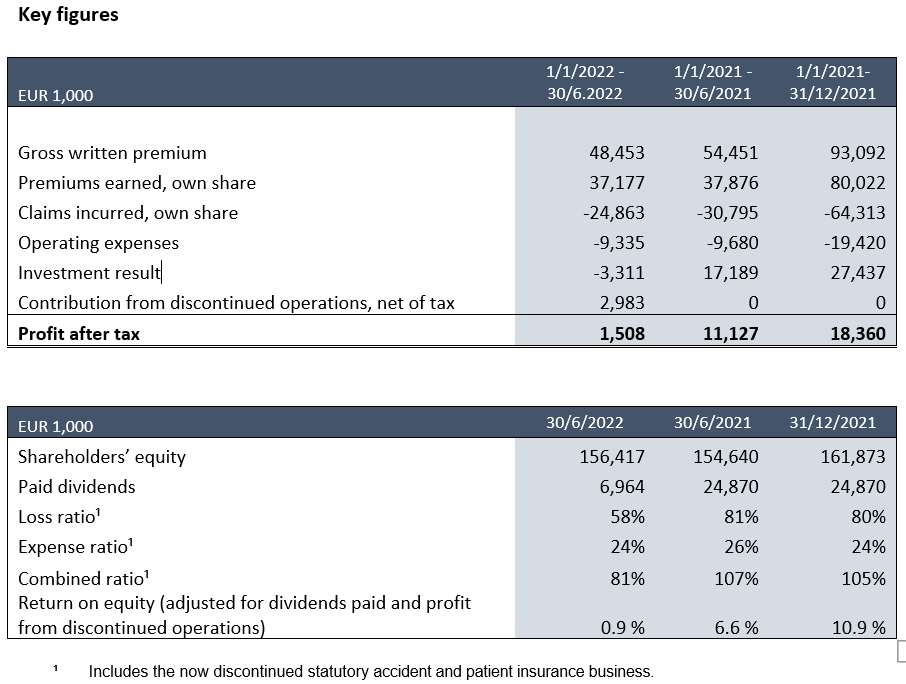 Alandia’s A- rating with Standard & Poor’s was confirmed on 7 December 2021 and remains as ‘Negative Outlook’.

Significant events in the first half of 2022

Risto Räty was appointed as Commercial Director for the Marine Division on 27 June 2022.

During the year, the company implemented a new financial system.

The AGM decided to distribute a dividend of EUR 35 per share.

The entire insurance portfolio of the statutory accident and patient insurance business (including all staff employed by the department) was transferred to LokalTapiola on 1 July 2022.

Alandia Försäkring Abp Board of Directors