Claims costs on own share amounted to EUR 50.3 million (70.4), of which EUR 52.9 million (62.4) consisted of non-life insurance. During the period, which was otherwise relatively favourable in terms of claims, Alandia suffered its largest claim in over ten years. The claim was partially covered by reinsurance.

The loss ratio for non-life insurance was 72.6 percent (97.7). The improvement compared with the previous year is a result of a more favourable claims outcome and a stronger premium base.

The return-on-investment portfolios at fair value was 5.4 percent (6.8). The year started volatile due to Covid-19 and at the end of March, the decline in the portfolio was the greatest, but the recovery was then strong for the rest of the year.

The KPI:s below are effected by the transfer of the live-insurance portfolio and therefore  not comparable to previous years.

The solvency for Alandia was significantly strengthened during the year by the good result, with the raising of subordinated loans that are eligible as tier 2 capital and the reduction of life insurance risk. Alandia Försäkring Abp’s solvency ratio was 273 percent (207). 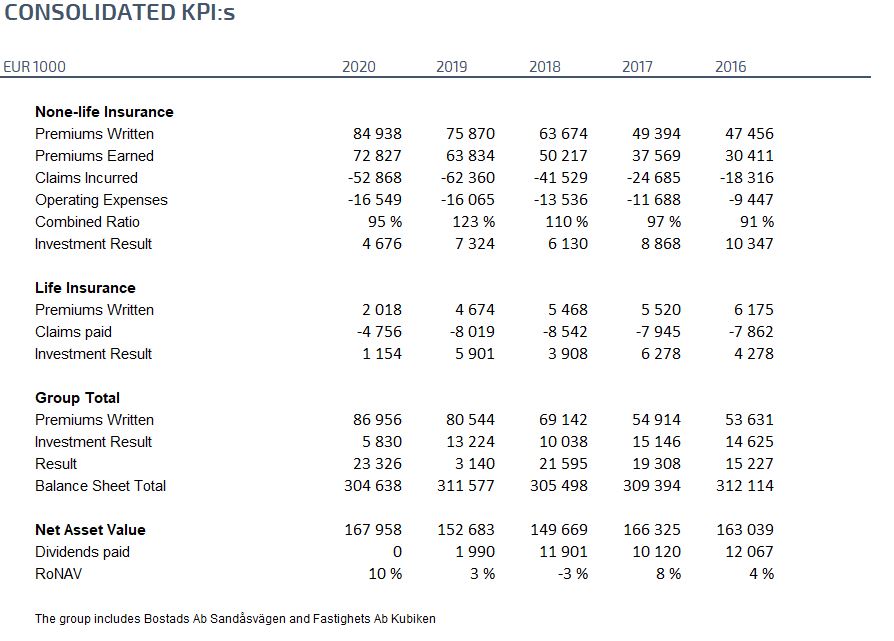 Alandia’s A- rating at Standard & Poor’s was confirmed on December 21, 2020 and remains on Negative Outlook.

Försäkringsaktiebolaget Liv-Alandia transferred the entire insurance portfolio with life insurance to Aktia Livförsäkring Ab May 31, 2020. In connection with the transfer, Aktia has issued subordinated loans of EUR 60 million to Alandia. The FIN-FSA Financial Supervisory Authoity and Standard & Poor’s have approved the subordinated loans as level 2 capital to cover capital requirements. As a result, Liv-Alandia revoked its license to operate as an insurance company. The company’s name was changed November 11, 2020 to Alandia Konsolidering Ab and the remaining operations only consisted of managing the company’s assets.

During the period, the holding in the associated company Nordisk Marinförsäkring AB was sold.

Premium income, in accordance with the growth strategy, is expected to continue to increase in 2021.

Covid-19 is not expected to have a significant impact on earnings growth in 2021.

Alandia Försäkring Abp
The Board of Directors