In early February 2019, an explosion and a fire severely damaged one of the two engines of Grizzly af Gefle, a 32-meter tug working out of the busy Swedish port in Gävle. Without the tug that doubles as a harbour icebreaker during winter months, the port would be in trouble. However, locating a suitable new engine and getting it fitted into the vessel was bound to be a difficult and time-consuming task, and the Port of Gävle called Alandia Insurance for assistance.

When the call regarding the incident came in, Alandia contacted Surveyor Lasse Hellring from the Gothenburg-based company JnJ Survey to assess the damage without delay. The Port of Gävle, a bustling import and export hub on Sweden’s Baltic coastline with regular port calls from a steadily growing number of vessels, relies on Grizzly for assistance in maneuvering large vessels in the crowded port. In the winter months, the tug also serves as a harbour icebreaker, the lack of which could quickly turn into another disaster. This is why Alandia wanted Hellring on the case in order to get the tug back into service as quickly as possible, although requesting such extended work from a surveyor is unusual.

In order to determine exactly what had happened during the incident and to find the best way to move forward, a team was rapidly formed between Alandia Insurance, Hellring from JnJ Surveys, engineers from Svensk Diesel & Propellerservice, and local representatives from the classification society Lloyd’s Register as well as from the Port of Gävle. 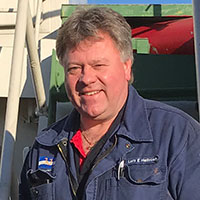 – We could choose the companies we wanted to work with, or help investigate what had happened to prevent it from happening again, and to then look at how we could resolve the problem, says Hellring about the first steps in the process of helping the tug back into action.

Since ordering a brand-new unit was deemed both too expensive and too slow a solution, it was decided that the team would try to locate a good second-hand unit to replace the damaged starboard engine of the Grizzly af Gefle.

Through its network, the team succeeded in finding a suitable secondhand engine in Denmark, which was then speedily inspected, purchased and shipped over to Sweden to the SDPS workshop on February 20th. Meanwhile, the damaged engine had been removed from the tug and transported to the same workshop.

One of the challenges faced by the team while working on replacing old engine parts with new ones was that the two engines turned in different directions. In addition, some of the engine documentation was missing.

Since the original engine maker, Deutz, was no longer in business, resolving these issues took some detective work. Luckily, the team had tracked down some former Deutz engine staff to ask them about the engine prior to its purchase.

Once it was time to get the engine fitted into the tug, team member Ingemar Johansson, Operations Manager at the Port of Gävle, who has an extensive professional network in the area, could connect the team with the necessary local businesses and suppliers.

– We were impressed when the JnJ team told us that the damage could be repaired so quickly, and then doubly impressed when it happened even quicker to get the new engine to the quayside, Johansson says. According to the other team members, Johansson himself had a substantial role in the swift and successful resolution of the incident.

On March 11th, the reconditioned engine was lifted into the vessel with a large crane arranged by Johansson. Following some days of fitting and tests, the engine was successfully started on March 25th. The next day, the vessel was cleared for operation. It had been six weeks since the incident was reported to Alandia.

Tommy Brune, Senior Claims Executive at Alandia Insurance, was part of the team working on the case. He underlines the strength of a team where all members are on the same page and able to contribute in their own area of specialty.

– It certainly gives value to the assureds and illustrates why we prefer long-term relationships, not only to our assured’s benefits, but to all our suppliers, surveyors, yards, lawyers, and repair firms, he says.

Since the repair Grizzly af Gefle has returned to becoming the workhorse of Gävle, and while there may the constant niggles with the engine, Johansson is reassured as these are always dealt with by Alandia and the team which it can quickly call upon to help.