From the bottom of the sea to the scrapyard

It was Friday afternoon the 12th of June. The fishing vessel Synne was supposed to sail from Denmark to her home port Arendal in Norway. But she never reached her port.

When the Synne steered off the coast of North Jutland in June 2020 she had just been repaired and rebuilt at a shipyard in Hirtshals. But one hour later the fishing vessel got a heavy list. Within minutes she had sunk to the bottom.

– The cause is still unknown, but Synne’s two-person crew was lucky. They managed to release the life raft and were soon saved by the Danish Coast Guard, says Jenny Appel, Claims Executive at Alandia.

As Alandia and Flekkerøy Gjensidige Båtassuranseforening were the two hull and P&I interest insurers of Synne, they were informed of the incident within a couple of hours.

– Our first decision was to appoint Nordic P&I to assist us in the handling of the casualty. This was necessary so we could investigate the casualty and the shipowner’s liability, says Johan Lång, Claims Manager at Alandia.

The next task was to call in a ROV (Remotely Operated Vehicle) to determine both the exact location of the wreck and the nature of the damage.

– Within a few days we had all the facts and could report them to the Danish Maritime Authority for their evaluation and determination. The question on everyone’s lips was obvious: Did the wreck pose an environmental hazard? That was for the authorities to decide, says Jenny Appel.

The Danish Maritime authority was of the opinion that the wreck could stay at the bottom of the sea as long as the antenna and the mast of Synne were removed. But as the sunken vessel had both bunker and hydraulic oil onboard, another decision was made by the Danish Defence.

– As the wreck was located in a sensitive area close to the coast with many beaches, it was concluded that the wreck posed a danger. To protect the marine environment and the coastline, the Danish Defence wanted Synne to be emptied of all fuel and hydraulic oil, explains Johan Lång.

– When we assessed the tenders, it became clear to us that the salvage costs of Synne was basically on the same level as the costs of removal of all the oil, says Lång.

A wreck removal project is always associated with risks, such as weather conditions and environmental risks. And towing a wreck to a recycling facility is also connected with serious risks.

– But we concluded it was a manageable risk. And salvaging Synne would give us the possibility to further investigate the cause of the incident. Furthermore, our salvage operation would give the owner of the vessel part of his fishing equipment back, says Jenny Appel.

But most importantly: by going for the salvage option Alandia could make sure Synne would be taken care of in a sustainable way and not pose a future hazard to neither other vessels, nor the marine environment.

The most sustainable solution 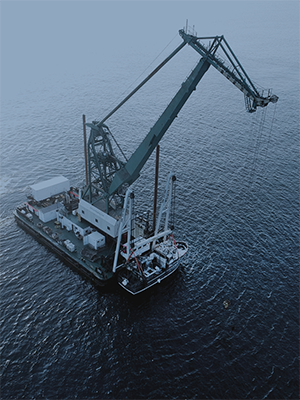 – We concluded that the removal of the wreck was the most sustainable solution. We therefore assigned the shipowning company J.A. Rederiet to perform the salvage operation, says Johan Lång.

On Tuesday the 7th of August Synne was salvaged from the sea and brought to Hirtshals where all the fuel and oil could be removed. The next day Synne’s last journey continued to a scrapyard in Frederikshavn.

At Alandia Jenny Appel is satisfied with how the story of Synne ended.

– We investigated different solutions and by doing so we not only fulfilled the requests from the Danish authorities, we also managed to handle the wreck of Synne in the most sustainable and environmentally friendly way. Instead of leaving the wreck at the bottom of the sea, metals and other materials have now been recycled or scrapped at an approved facility, she says and continues:

– The salvage of Synne is a textbook example of a smooth and professional collaboration between all the involved teams.

In early February 2019, an explosion and a fire severely…
Read more

The weakened Gulf Stream is a threat to winter shipping

Risks and rules in respect of winter navigation