No crew members were hurt when a fire ripped through a packed car deck on Mignon, a 20-year-old, 13-deck vessel managed by Wallenius Marine, in 2018. Although the vessel was fully repaired shortly after, from an insurance perspective the incident yielded valuable insights regarding risk reduction and increased safety.

The fire started as the vessel sailed in the South China Sea towards the Singapore Straits. When the fire alarm went off, the crew were able to quickly locate and extinguish the fire in accordance with standard safety procedures. The bridge team immediately contacted both relevant authorities and land-based personnel at Wallenius Marine in Stockholm, Sweden.

One main reason the fire didn’t have time to spread was Mignon’s CO2-based fire suppression system. Though fires are luckily few and far between, fire suppression systems need to be ready to be deployed quickly. Not only are they part of the critical safety systems a vessel needs for class approval, they are key to extinguishing fires that cannot be tackled safely in any other way.

The crew is trained and drilled regularly on the use of the CO2 system. However, most Chief Engineers will never have to use it in the heat of the moment, when lives really are at stake. Even for the most well-trained personnel, a fire emergency is an incredibly stressful situation. This is why the vessel’s Chief Engineer hesitated for a moment in the CO2 room before he deployed the system. Eventually, about two thirds of the CO2 available was released, which was slightly more than needed.

The vessel continued sailing westwards and anchored in international waters off the coast of Malaysia, close enough to Singapore for investigators and contractors to board the ship.

It was here that Alandia Insurance representatives boarded the vessel together with a class surveyor and the shipowners´ superintendent, Anders Carlsson.

– The damage on the lower decks was devastating, Carlsson recalls.

– The fire had penetrated three decks – we could see how the heat had gone through the decks at the lashing bolts that secure vehicles to the decks and what it had done to the pipes and wiring.

Some of the deck areas had buckled both upwards and downwards in the intense heat, and since the hydraulic system had been destroyed, the vessel was unable to transfer ballast or fuel around properly. The damage also extended to the fire alarm electrical system and lighting.

Following the fire, the vessel needed to be steered towards a repair yard but was still full of cargo. Representatives from the vessel’s class society, Lloyd’s Register, gave the vessel permission to sail on but insisted the CO2 fire suppression system be serviced and refilled, and that the fire alarm system and tank hydraulics be temporarily repaired.

However, before anything else could be done, the fire inspectors had to complete their inspection of the debris in order to determine the cause of the fire. 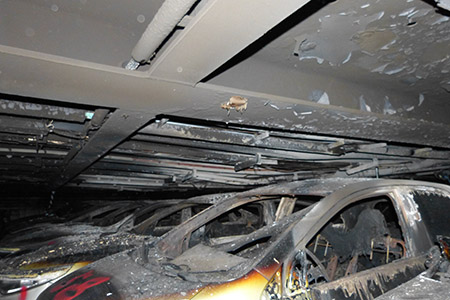 The crew had to work constantly, Carlsson says. First, they had the stress of the fire to deal with and then they worked to enable making reparations. Luckily, the vessel had some empty space on deck two, where some of the undamaged cars could be moved  in order to facilitate moving the damaged ones away from impaired steel work and structures.

– We needed to get these repairs done, get a supplier to deliver CO2 via a barge and to then continue the voyage, says Carlsson.

– It was thanks to the crew’s professionalism and hard work in what was a difficult time that we achieved what we did.

The vessel was able to continue its voyage towards Europe, and Carlsson liaised with Alandia’s representatives to look for a place to send the vessel for the much-needed repairs. They opted for Remontowa in Poland.

Alandia and Carlsson chose Remontowa because the superintendent, who had some experience of collaboration with the yard, knew what it was capable of and that it had capacity ashore for unloading the damaged cars for a thorough inspection by the fire investigators.

The continued investigation revealed that the cause of the fire was an electrical short circuit within the starter motor of a second-hand car. The standard practice of leaving the driver-side car windows open on loading in order to make accessing cars parked closely together easier, was also noted. One investigator suggested that this practice could contribute to fire spreading on a car carrier, although it was not the case this time.

As a result of the insights gained during the incident, the ship operator has now initiated some new practices onboard its vessels. Second-hand vehicles loaded in South Korea have their battery negative poles disconnected to reduce the risk of fire, and all cars on board now have their windows shut during the voyage.

The company has also had discussions with the manufacturer of the onboard CO2 fire suppression system to amend and simplify its operating instructions in order to make deploying it in the stressful and rushed conditions of a real fire easier and more precise, which in turn will maximize the chances to successfully handle an escalating fire.

Inside the head of a Risk Analyst